The exorbitant cost of being informed

The twenty-first century has not been kind to the newspaper industry. Across the globe, advertising and sales revenue has plummeted as people have turned to social media to keep themselves informed.

In the UK, national newspaper circulations have fallen from 14.3m in 1997 to 7.6m in 2019. The last time that newspaper circulations were this low in the UK was in the 1920s, when long dormant titles such as the Daily Sketch, and the Daily Chronicle sold hundreds of thousands of copies per day. The most popular paid-for newspaper in the UK, The Sun, sells fewer copies each day (1.41m) than the fifth most popular newspaper The Daily Telegraph (1.44m) did in 1980.

In the United States, newspaper circulations are below the level that they were in 1940, when records began.

To fight back against falling readership and advertising revenues newspapers have increasingly turned to paywalls, where readers pay a recurring subscription fee to access newspaper websites. However, traffic to news (both traditional newspaper and digital-native) websites has levelled off in the last couple of years following many years of steady growth.

The poor outlook for the newspaper industry is set to continue, with PwC forecasting that newspaper revenues will shrink at 8.3% per year over the next few years.

Currently, there is no service that allows readers to access content from multiple newspaper paywalls, akin to the way that a Netflix subscription allows viewers to stream various types of content for a fixed monthly fee. This means that if you wish to be able to read news articles from multiple publications, you would need multiple subscriptions. Apple News, launched in March 2019, aggregates content from a variety of sources, but focuses on magazines rather than newspapers and holds only a limited amount of content from newspapers.

Many newspapers, such as The Guardian, don’t hold their content behind a paywall, but the paywall model is one that an increasing number of newspapers are migrating to.

However, the requirement for multiple paywall subscriptions means that it would be an extremely expensive proposition. To demonstrate this, I looked at the top 200 newspapers in the world by web ranking, and calculated how much their cheapest monthly subscription plan would cost (excluding promotional discounts) for the 60 paywalls I was able to identify. I also included my two local newspapers (The Belfast Telegraph and Irish News), and a selection of other publications that I read regularly. The list was:

The cost of subscribing to all of these publications would cost $864 per month, as broken down in the following table; I’ve converted all prices to US dollars for comparability purposes. 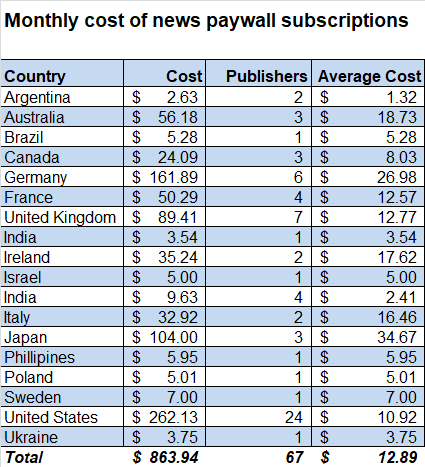 There are extremely few customers (i.e. no one) that would be prepared to countenance paying nearly a thousand dollars a month to subscribe to 67 different publishers. Compare, for example the cost of a premium Netflix subscription in the United States ($15.99). News paywalls are most expensive in Germany and Japan, and cheapest in India and Argentina. Also, for many of these subscriptions you have to pay for a year’s subscription upfront, which would entail paying over ten thousand dollars in a lump sum.

Of course, you could argue that nobody really needs (for example) 24 separate news subscriptions in the United States. But even subscribing to a small number of news paywalls is likely to be higher than the combined cost of Netflix and Amazon Prime.

The success of The Guardian’s “Supporter” scheme, where readers voluntarily pay £5 per month to support the newspaper’s journalism, demonstrates that there is a willingness amongst readers to pay to support high quality journalism.

The collapse of the newspaper industry has severe consequences for the health of democracies across the globe. If the news industry is to fight back, then they are going to need a way of allowing readers the easy reading experience that Spotify subscribers have for music and Netflix subscribers have for film and TV.